Great Indian Safari Tour' is a luxury, private tour that offers guests exquisite accommodation at some of India's best wildlife reserves. The tour begins in Delhi, where an expert local guide will take you on a full day city tour. A short flight and drive then takes you to Pench, an area of dry deciduous forest that boasts some exotic wildlife that you can track on a jungle safari. From Pench you will be transferred to Kanha, where you can stay in a tented suite on the banks of the Banjaar River and spend time with a local naturalist guide to discover more about the region's wildlife. The next stop on the tour is Bandavgarh, where you can enjoy a jungle safari into the National Park in search of the elusive tiger. After spending three nights in a charming jungle suite you will be transferred to Panna, where you can enjoy a jungle safari in search of sloth bears, jackals and hyenas. After a visit to the UNESCO designated Temples at Khajuraho you will fly back to Delhi, where the tour end.

Upon arrival at Delhi International airport; you will be warmly welcomed by your host and chauffeured to the hotel The Imperial Hotel’ which boasts a rich historical past with an awe-inspiring heritage and a truly international appeal. Unpack, settle in, relax and recover.

After your breakfast you will be met and chauffeured for your private guided sightseeing tour of Delhi: OLD DELHI Chandni Chowk - Chandni Chowk originally meaning moonlit square or market is one of the oldest and busiest markets in Old Delhi. Jama Masjid- The Jama Masjid of Delhi, is the principal mosque of Old Delhi in India. Commissioned by the Mughal Emperor Shah Jahan, builder of the Taj Mahal, and completed in the year 1656 AD. Enjoy a Rickshaw ride which will go through the narrow lanes of Old Delhi.

After the food break with the same guide your sightseeing will continue in New Delhi. This will include: Drive through Lutyen’s Delhi, driving past Rashtrapati Bhavan, India Gate and the Old Secretariat. Humayun’s Tomb - Humayun's tomb is a complex of buildings built as the Mughal Emperor Humayun's tomb, commissioned by Humayun's wife Hamida Banu Begum in 1562. Qutub Minar - The Qutub Minar, a tower in Delhi, India, is at 72.5 meters the world's tallest brick minaret. Construction commenced in 1193 under the orders of India's first Muslim ruler Qutub-ud-din Aibak.  After sightseeing you will return to the hotel.

Today you will fly to Nagpur and be driven to your lodge in Pench. On arrival your naturalist guide will take you on an afternoon safari in search of wildlife such as tigers, leopards and sambar deer. Enjoy dinner at the hotel.

Enjoy an optional morning safari before being travelling overland to Kan ha. Spend the afternoon relaxing by your tented suite on the banks of the Banjaar River.

Today you enjoy two jungle safaris with expert guides in search of some of the region's rich wildlife including tigers, leopards, sloth bears, hyenas and jackals.

Today you have the option of joining another morning jungle safari. Later you can pause at sunset to watch the sun sinking over the jungle, before enjoying a sumptuous Indian meal served at the hotel.

Travel overland to Bandhavgarh, where you will stay in a kutiya - a charming jungle suite. After a delicious lunch you can indulge in an afternoon siesta or amble down to the pool for a cool dip.

This morning enjoy a jeep safari in Bandhavgarh National Park. After a delicious lunch at the hotel you will depart on an afternoon drive in search of tigers, sloth bears, wild dogs and the shaheen falcon. Enjoy ice-cold cocktails on the guest veranda before dinner.

Today you can embark on some optional jeep safaris in to the park. Enjoy a sumptuous dinner at the lodge tonight

Today you will be transferred overland to Panna, where a naturalist guide will take you on an afternoon safari in an open vehicle through tropical forests in search of exotic wildlife.

Enjoy a delicious meal this evening at the hotel.

You will be driven to Khajuraho, where you will explore the Western group of Temples with a local guide. Later today you will be transferred to the airport for your flight to Delhi,

VIP Assistance and transfer to airport for flight to home.

The photo of your private car 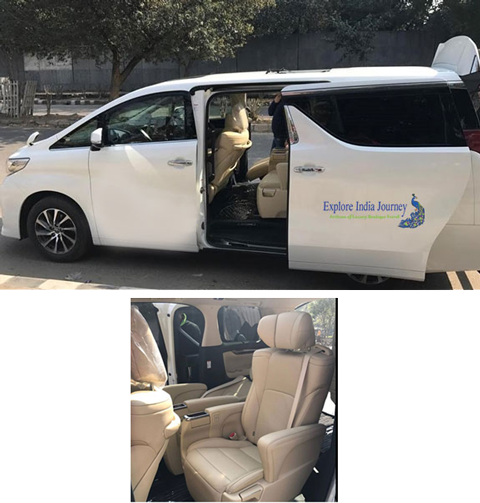